The Cruelty of Fishing: Do You Ever Realize It?

Remember? – The last time you went to the restaurant, ordered for fish and waited impatiently for your favorite dish, tapping on the table. But did you ever think – the fish in your plate was once a cute, lively creature living in its own world, very much like a little human child playing in the vicinity of his home?

A lot of people go to the supermarket and pick the “Dolphin Safe” tuna and pat themselves on the back that they made a humane choice that took care to spare those loveable, friendly, beautiful sea mammals, whom we know are also highly intelligent. However they discount the cruelty of fishing in general and the process that makes it possible for people to go into a shop and buy fish for eating.

It isn’t just the many inhuman ways that humans have devised to trap sea creatures of all sorts and shapes, the cruelty of fishing also includes the sort of torture that the creatures face when they are caught and pulled on to the deck of fishing vessels. 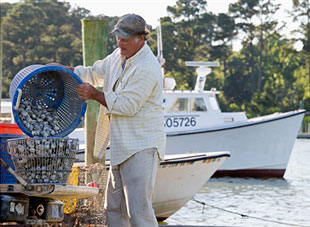 They are suffocated, bludgeoned, bled, frozen, disemboweled and meted out death in horribly painful ways. Imagine how you would feel if you were pulled out of the air you breathe in, using a similar fishing line to match your size, and blood all over your face!

Here are some of the many incredibly cruel ways that man has devised to trap fish:

Large ships release into the sea baited hooks connected to lines that could be as long as 75 miles. Attracted to the bait, various sea animals get caught on the hooks and very often bleed or drown to death or they struggle until they are reeled in, which could be many hours of torture. And it isn’t just fish that take the bait – birds, sea turtles, dolphins and other creatures too do.

These nets form a sort of vertical wall in the sea, with weights at the bottom, and floats at the top to keep them in place. The fish get stuck in these and either suffocate, bleed or struggle to death. Those that survive the ordeal are killed on the deck of the ship.

These are large nets that are designed principally for trapping tuna. Since tuna typically hang out with dolphins, it is large groups of dolphin that are tracked and then the net closes around large groups of tuna, and reels in the fish which are almost always alive when they reach the ship deck to have their gills slit and their innards disemboweled.

Huge bag shaped nets crawl along the ocean floor pulling not just sea animals but also coral, rock and other parts of the oceans ecosystem into the nets. This sort of fishing method doesn’t just exemplify the cruelty of fishing but is also bad for the ecosystem that it has been called the deep sea equivalent of razing land forests to the ground.