Anyone who’s had a pet dog has probably seen their pet twitch and growl and move in their sleep and has wondered what is going on inside the mind of their furry friend. Many of us would wonder what animals feel and experience; whether they also dream like us.

Even if you haven’t been observing your pet’s sleep patterns, science suggests to us that animals do in fact dream; that they have complex, retainable dreams. So perhaps the twitching limbs, the fluttering eyelids, the whimpers and growls, and the facial tics of your pet when asleep could actually mean something?

Animals have the same sleep states as human minds 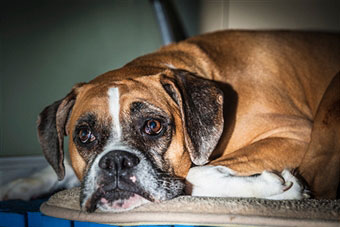 So, scientists have monitored the brain activity of animals such as rats when they sleep and claimed to have found that rats sleep and dream much the same way as we humans do. Humans as well as animals are seen to experience REM sleep – the sleep stage associated with dreams. Across species, we see the same sort of twitching, paralysis and eye movement.

Earlier it was thought that only more complex species such as dolphins and primates were capable of certain thought process and consequently of dreaming. However later studies that examined animals and their dream patterns reported that not only do animals dream, they have complex dreams. Researchers claimed that rats that were trained to run in a maze then dreamed about these activities.

What’s the proof that animals dream?

While it is a fascinating premise that animals dream the same way that we do, some experts believe that there is insufficient evidence to say that animals do in fact dream. While you and I could narrate to someone the fact of having dreamed (even if we are unable to recall the dream in detail), animals cannot do so.

So failing someone actually telling us about having had a dream, how can we be sure that that person had a dream? Certainly animals cannot tell us whether they do or do not have dreams. Given that, we can never really be sure!