Not only are these beautiful sea mammals hunted for their meat – traditional coastal communities have depended upon this meat source – they are hunted for blubber and seal oil. Even more reprehensible is the fact that they are slaughtered for their pelts.

Here are some shocking facts about seal slaughter:

The commercial hunting of seals in Canada is allowed by law and is the largest slaughter of marine mammals in the world. 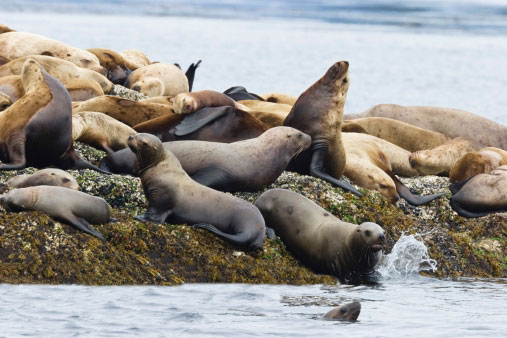 98% of these were babies less than 3 months of age, who were yet to take their first plunge into icy waters or have their first solid meal.

Yearly quotas for seal slaughter are set by the government. However when these quotas are exceeded there is no punitive action taken against violations.

It is estimated that for every seal that is “landed” for slaughter, another is meaninglessly shot and lost under the ice. Thus, actual slaughter counts are much higher than purported records.

Seals often do not die from that ‘first shot’ – in fact 82% will suffer their first bullet wound and then suffer until more bullets put them out of their misery or until they bleed to death, left to die a slow and agonizing death after being shot.

A weapon known as a ‘hakapik’ is often used to bludgeon seals to death. This is done so that the pelt of the animal is not ‘damaged’ in the process of killing it.

67% of seals are not tested for unconsciousness.

Seals may be skinned alive and little unconscious pups may be dragged across the ice with boathooks.

Just a few hundred fishermen manage to kill hundreds of thousands of baby seals each year in between their regular fishing seasons; which is just a few days in March and April.

Consider the main reason for the wanton slaughter of seal pups that may be less than a month old: fashion… boots, jackets, fur coats, ear muffs and more.

Scientists have stated that seal hunting is irresponsible, reckless and unsustainable.