For a long time now, vegetarian has been portrayed as the skinny weakling, unable and unwilling to do anything that requires physical strength. Also with the spreading tide of veganism, vested interests such as the meat lobby and other food producers try to perpetuate the myth that vegans are weak.

So are vegans weak? Or do people become weak as a result of going vegan? Do such claims have any veracity?

Ok, first, let’s have a look from ‘common sense’ point of view. Say you get energy from eating goat. But where does the goat get its energy from? Plant, isn’t it? Now isn’t it common sense that you should get more energy by directly eating plant, rather than the goat? 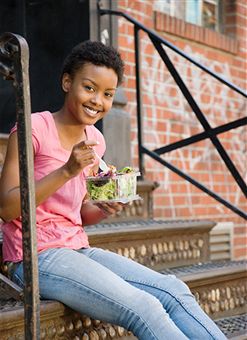 Number of vegan animals like horse, elephant, buffalo, etc. which solely rely on plant diet go on to prove this point. Do you find them weak from any angle?

It won’t be out of context here to quote Henry David Thoreau: One farmer says to me, “You cannot live on vegetable food solely, for it furnishes nothing to make the bones with;” and so he religiously devotes a part of his day to supplying himself with the raw material of bones; walking all the while he talks behind his oxen, which, with vegetable-made bones, jerk him and his lumbering plow along in spite of every obstacle.

The argument is made today that humans are meant to eat meat and that they have always been meat eaters; that Homo sapiens evolved as omnivores and so it is only natural that we eat meat today. By extension it follows, that not having meat is bound to make you weak! This is demonstrably false because a bulk of research points to plant based diets being healthier for human beings.

Earlier it was mainly religious reasons for people being vegetarian. Take for instance the case of Jainism, which flourished in India more than two thousand years ago. Jainism eschews not only all animals and animal products but also root vegetables because of the possible harm to creatures while harvesting and because by eating root veggies you destroy the entire plant.

Today, it isn’t just religious but ethical reasons, reasons of personal health and considerations about environmental impact that cause people to make food choices that are more humane, and that are kinder to other creatures.

As we have said, there is plenty of evidence to show that a vegan diet is better for the human system. However sometimes some people claim to feel ‘weak’ when they give up meat and other food products eschewed by vegans, claiming to have fainted or feeling weak and undernourished. Well it could be that the body is used to a certain kind of intake over the years, and a very significant change such as going from being a meat eater to being vegan may take time for the body to adjust to.

Any perceived weakness has to be temporary, so long as a person follows a varied and well balanced vegan diet. Many athletes who have turned to veganism are the best argument against the claim that vegans are weak.